If I’m not mistaken, Gregoire is Candian.

I have followed her on Twitter for over a year. She does a lot of posts combatting complementarian-type takes on marriage, which I appreciate (though I must say I take some exception against a post or two or video or two she’s made criticizing the concept of remaining a virgin until marriage – I tweeted at her before awhile back explaining my objections to her about that, and I was polite about it).

I wish Gregoire well, but I had to unfollow her tonight on Twitter. I’m not sure if she follows me on there, but she is welcome to un-follow in return, if she wants to, I’d understand.

In the last couple of weeks, Tweets that Gregoire “likes” on there periodically show up on my Twitter feed (meaning I have to see them), and they’re usually these Tweets by conservative critics or Trump detractors who have really warped views about Trump voters or American conservatives generally.

In the past week, I did contact Gregoire on Twitter to try to clear up some misconception she herself Tweeted about American politics.

She doesn’t seem to possess any understanding of why Americans who voted for Trump voted for him or found him appealing. I myself did not vote for Trump in either election, but I understand why some were drawn to him and his message. (I’m an American who was born and raised in the United States, and I used to be a Republican for many years.)

I feel the piling on against Trump and his supporters is unfounded.

I’ve also noticed this tendency by Gregoire and people like her to never acknowledge that persons and groups on the left (American Democrats and progressives in the U.S. and the world over) are actually guilty of some (or many) of the things they criticize Trump or conservatives of.

I see no self-awareness in most Trump critics or critics of American conservatives.

When I first began my soloLoner account on Twitter a few years ago, I was in a questioning place in my life. I was open to listening to liberals and reading their tweets and online articles.

But in the past two, three years, the liberals and Trump critics have become insufferable, extremely hypocritical, and unbearable.

I have since been unfollowing, muting, or blocking anti-Trump, anti-conservative accounts.

(I still follow some liberal accounts, but I’m a little more picky now about which ones. If an account is too anti-conservative too often, I un-follow it.)

I’ve had enough of the hypocrisy, the double standards, and the unwillingness of liberals, or those engaging in concern trolling over American politics (and I note they express NO WORRY over leftist clamp downs on conservative free speech), to examine their own behavior, and to consider they’ve been wrong about some things and have been treating Trump voters or conservatives generally (ie, whether Trump supporters or not) poorly.

…below you can see a screen cap of (Link): my response to Tait’s tweet, where I am trying to get her to consider how liberals are abusing conservatives or Trump voters,  but I suppose she pays that no mind (more comments below these screen cap images
– I don’t know why this blog platform is adding so much space above and below these images): 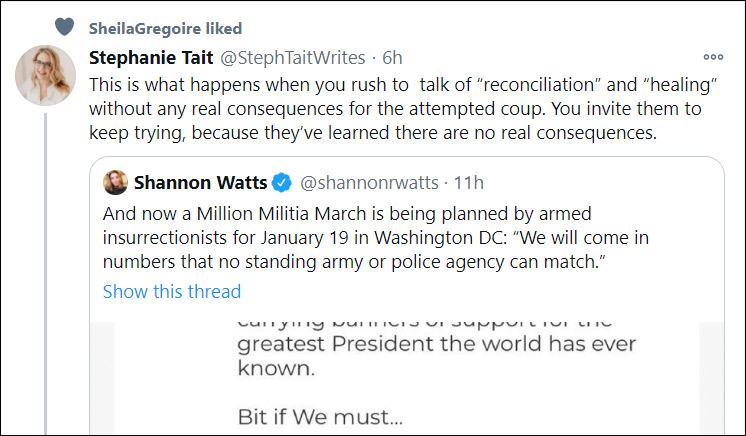 I’ve had enough of this. It’s so patronizing.

The way you’re going to get another Trump in four to eight years (or possibly start a civil war shortly) is precisely this sort condescending, hypocritical behavior, where you gloat about Trump voters now being banned off Twitter, where you mock them (not that Tait lady in particular, I am speaking generally),
and where you portray all Trump voters as being “insurrectionists,” or even this more genteel pearl clutching of, “Oh dear me, the nutty Trump voters are saying they’re going to march to D.C., armed, next week.”

It’s tiresome to see Trump-voter critics constantly point out the “sins” of Trump supporters and express worry over what they might do…
But turn a blind eye of what drove the Trump voters there to start with, to refuse to try to understand their grievances
(but demand that they listen to left wing, Social Justice grievance culture all day, every day),
and turn a blind eye to the “sins” of progressives.

Note: some of the Trump advocates at the rally at the Capitol were peaceful, and many of the rest attending were there to uphold constitutional ideals, to stand for election integrity – does that mean how some of them went about it, ie., smashing windows, etc, was acceptable? No.

But Trump voters had legitimate concerns, and if Democrats, liberals, and others keep dismissing them and their concerns, or depicting all of them as violent seditionists, they’re only going to drive the divisions in the nation deeper.

Biden promised unity – but instead, he continues to attack Trump, conservatives, Trump voters, and as of today, he actually compared Republican senators to actual Nazis.

If you’re the sort who sits around “Liking” pearl-clutching, “Oh dear me, oh my” tweets which comment upon the actions of Trump voters, where is your concern over garbage like leftist controlled Big Tech companies mass banning Republicans and conservatives all day today, and things like this (below) from Democrats and Biden, which is only adding fuel to the fire?

(Link): ABC, CBS Reporters Delete Hot Tweets — One on ‘Cleansing’ [“Cleansing” Trump voters and Conservatives] and One on DeVos Quitting

In light of events this week, I am now unfollowing, muting, or blocking people who are sympathetic to leftists, regularly “liking” or making comments critical of conservatives and Trump voters, and so on. Their behavior has grown obnoxious.

I did not vote for Trump in either election, but I am horrified and repulsed by the mass purging and intimidation of his voters (or of conservatives generally) and the unwillingness of these same people to hold the left accountable – to only point to the shortcomings of Trump voters, Republicans, conservatives. I am done with it.  Done.

Trump is American. But censoring democratically elected politicians is something that should concern every Canadian of every stripe. Now the precedent has been set. I follow quite a few Canadian politicians, especially conservatives. Has a single one of them expressed dismay?

Update.
I have also Un-Followed a user named Ashley (my Tweet to her (Link): here).

Ashley’s twitter feed is filled with Trump bashing material. You can see an example below.

She also “liked” a (Link): news headline by pro-Trump tweeter Jim Hoft who said that yet another site has banned Trump – I do not support anyone who “cheers on” suppression of free speech, dePlatforming anyone over their political views and that sort of thing.

As I said above, I am done with this obnoxious behavior and the people who agree with it. No more.

Ashley has her Twitter account set to private, so I used Photoshop to slightly blur her profile photo, as I assume she doesn’t want that made public(?):

@jesusclarinet3
Er… I see you liked this tweet below.https://t.co/27QMmPIDkR
You do realize I am ~not~ a Trump hater, right?
You may want to read this below & unFollow me on here:https://t.co/zeJCNBxLrG

(Link): Democrats, Never Trump Republicans, Progressive and Apolitical Christians – A Double Standard – “You Can’t Vote For X And Be A ‘Real’ Christian and be in the ‘Cult of X’” – The Left Have Turned Politics Into a Religious Cult

(Link): No, Christians and Churches Do Not Idolize Virginity or Sexual Purity or Modesty

(Link): The Christian and Non Christian Phenomenon of Virgin Shaming and Celibate Shaming

But the "Trump voter concern trolls" all up and down my social media feeds never comment on the awful actions by the left against the right, such as…#JoshHawley #JoeBiden #FreeSpeech #BigTechCensorship #Twitter #Facebook https://t.co/SYeOuBRhck